The Boise Pride Festival is in hot water over the inclusion of a kids’ drag show.

The show will include children from the ages of 11-18, according to an event description.

The City of Boise is hosting a festival featuring child drag queens as young as 11 years old. Sponsored by Citibank, Wells Fargo, Target, and Hewlett-Packard. pic.twitter.com/LgGdjgrxBU

A drag show for kids, an event at the Boise Pride festival, has sparked backlash from the Republican party and far-right groups calling it inappropriate — but, children expressing themselves and their identities is empowering and builds confidence, says Boise Pride.

The drag show for kids, which is separate from the other drag performances, is scheduled to take place on Sunday at the Boise Pride Festival. The attention surrounding the event began on social media with far-right groups calling to protest the event. One post included a picture of a gun saying “Can’t expect God to do all the work” with a message to others: “Sunday, 9/11/2022, time to start at the Fred Meyer pride parade.”

Boise Police Department was made aware of these comments. Pride is also increasing their security at the event this year.

Dorothy Moon, the Idaho Republican Party chair, released a statement saying companies who sponsor pride are “financing the sexualization of our children and the perverse idea that children should engage in sexual performances with adult entertainers.”

Read the full statement below:

Boise Mayor McLean campaigned as a moderate, but she has governed like her radical colleagues in Seattle and Portland. It’s no wonder that she’s now put Boise in the middle of a national firestorm over the sexualization of children. To be clear, this is no sleight-of-hand or political wordsmithing: Idaho’s Democrat party believes it is not only okay but laudable to encourage children to engage in public displays of sexuality. For those who have been following the radicalization of the Democrat party, this should come as no surprise.

What is surprising is to see who is financing this attack on Idaho’s children. Out-of-state companies promise to bring investment and jobs to Idaho. Instead, they are financing the sexualization of our children and the perverse idea that children should engage in sexual performances with adult entertainers. I call on all concerned Idahoans — and the lobbying groups that represent many of these out-of-state businesses who seek tax benefits and subsidies from our legislators, including IACI — to disavow this attack on Idaho’s children and to invest their sponsorship dollars in the Boise Rescue Mission that serves families, women fleeing abuse, and disadvantaged children. Children should be given the chance to live out a childhood free from violence, hunger, and the sexual appetites of adults.

Zions Bank, a sponsor of Boise Pride, pulled out of the event Wednesday.

A statement from the bank said they were unaware of the performance involving children. 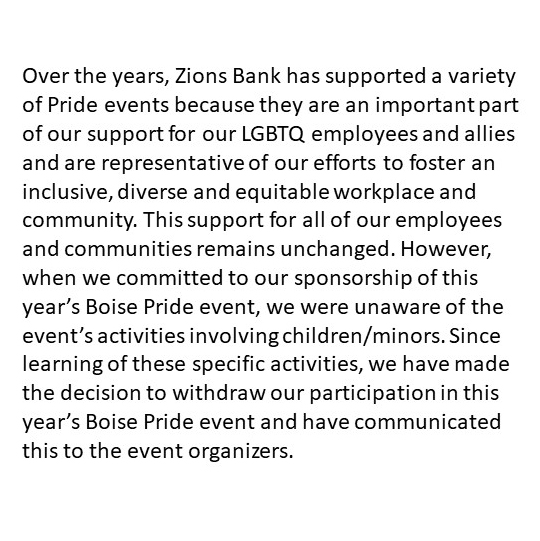